Just before Christmas I've ordered the nanoKeyer kit from Oscar DJ0MY.  It was in the letterbox when we returned from camping in mid January.

The firmware is written by K3NG http://radioartisan.wordpress.com/arduino-cw-keyer/ .  The firmware has all the features of Winkeyer by K1EL and some more.  Can be used with most contest loggers.

Oscar does not supply the Arduino, I had to buy an Arduino Uno on eBay.  The arduino is the "engine" of the project.  The assembly time was hardly two hours an a little bit. It took a whole day to source the enclosure and drill all the holes. 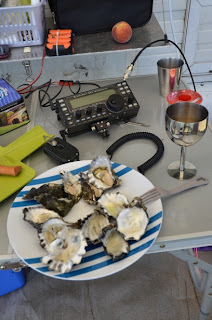