QSL cards for VK2SSI are printed.

Few days ago Tommy sent me the images of the front and back of the South Solitary card.  Very nice.  No doubt the recipients will be very happy.

Few weeks ago I got invitation from Allan VK2GR to join him, Tommy VK2IR and Dave VK2AWD in a team: "wombats of NSW" CW mode only.  Quickly obtained the permission from the great boss to go.

Worked it from home: 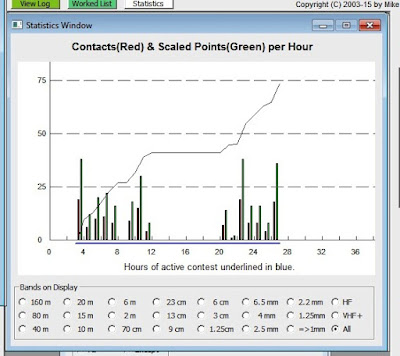 As you can see from the above statistics picture it was not very busy contest.  I may ask Alan VK4SN later how many logs were submitted.  Interesting rule in this contest is, that you may make contact with the same station again after three hours.  The program VKCL takes care of this.  Without this logger the test would be impossible.  The big gap in the middle of the graph is my bed time... Mind you there was not much action during the night.  All good people were in bed too.

The conditions weren't very good at all.  Most obviously we are starting to descent on the solar cycle curve now.

However because the contacts for the RD are only between VK, ZL and P29 the condx were adequate. 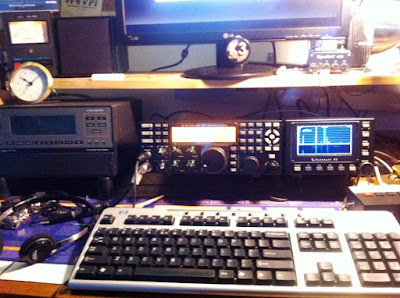 This is the operation position... The logging program has no provision for macros so I had the important messages programmed in my Winkeyer and the rest was done by paddle.  Easy stuff.  Nobody was running faster than about 22 words per minutes and some were much slower and even using hand key.  Interesting stuff, quite refreshing really.  Comparing to big internationals, where all run macros and run at 27 to 35 words.. That speed makes is VERY exciting and brings the sweaty palms syndrome on. Not in this contest for sure. 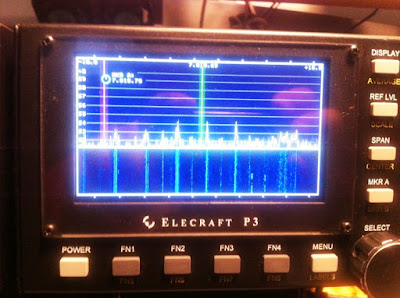 QRM at times was atrocious.  The above pics shows somebody's TV QRM on 40 m.  Good part was, that the QRM was not there at all times.

The photos are not very good quality.. being taken by mere mobile phone.

I was lucky to clock 147 contacts for 294 points.  Allan and Tommy score was much higher, because they had the fortune of having 160 antenna and QSO on 160 yields 6 points per QSO...
One of there days I'll figure how to put 160 m (some sort of) antenna on my roof.

So that is RD for yet another year.

many thanks to Allan, Tommy and Dave

It is Tuesday and I've imported the ADIF from VKCL to N1MM for further analysis. 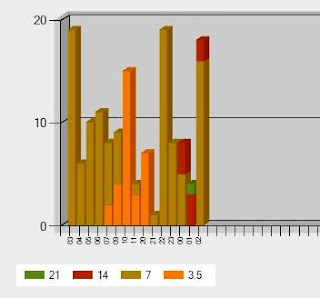 Here are the Max Rates:

And here are the runs:


PS
I had made several attempts to erect 160 m antenna on my roof, but the effect was that I got QRM gathering device only.
at August 16, 2015 No comments:

Another piece of wallpaper.

Very pleasing piece of wallpaper appeared in my letterbox this afternoon: 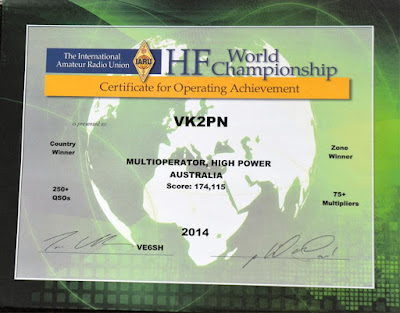 They (the HQ) made mistake... Not Mulitoperator..  I was single op.